4 stars! for Bared To Him ~ Night Owl Erotica Reviews

Here’s the link for more of this exciting review:

Human by day, and a tentacle shape shifter by night, sexy Gray Wagner, is the last male that Miranda Bolton dreams of falling in love with. He’s an irritating, arrogant male who teases her to no end. Due to her ancestry, Miranda knows she has a chance at becoming a shifter just like Gray. Alone with him, travelling the high seas on a yacht, Gray suddenly becomes the only male she wants to mate with, and she’s going to gets what she wants…

Alaskan custom boat maker, Gray Wagner, promised Miranda’s dad that he would keep his daughter safe during their weeklong ocean voyage to attend a mutual friend’s wedding in California, but Miranda’s succulent shifter scent is driving Gray to distraction. He knows he shouldn’t be thinking about doing all the dirty and delicious things he wants to do to her, but all his promises to Miranda’s father disintegrate when Miranda shifts and Gray goes primal…

Bared to Him is a tentacle sequel to Passionate Ink – but can stand alone. 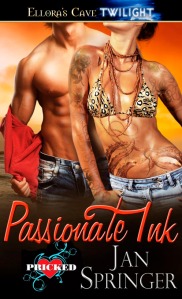 It takes all his self-control to keep from ravishing the sexy woman right on the spot. Calder has to tell Cat the truth about her heritage. She’ll either accept her birthright as a shifter—or succumb to madness, forever losing their chance at love…

This site uses Akismet to reduce spam. Learn how your comment data is processed.