Get it Free at Audible – more details here.

Jennifer Jane Watson has spent the past ten Christmases in a maximum security prison. The last thing she expects is to get early parole along with a job on a secluded Canadian cattle ranch serving Christmas holiday dinners to three of the sexiest cowboys she’s ever met!

Rafe, Brady and Dan thought they were getting a couple of male ex-cons to help out around their secluded ranch. The last thing they expect is an attractive and very appealing woman fresh out of prison. In the snowbound wilds of Northern Ontario, female companionship is rare. It’s a good thing the three men like to share…

They’re dominating, sexy-as-sin and they fill JJ with the hottest ménage fantasies she’s ever had. Suddenly she’s craving Cowboys for Christmas and wishing for something she knows she can never have…a happily ever after.

New Audiobook Release! The Biker and The Bride by Jan Springer

The Biker and The Bride by Jan Springer 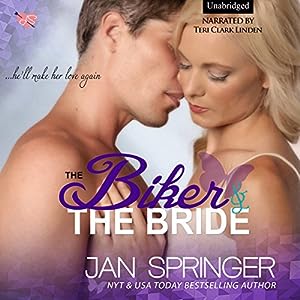 Paperback: Amazon or your favorite e-tailer.

Wrapped in red-hot lust for revenge, Avery plots to murder the man responsible for the death of her son. Her plans are dashed when her ex-husband crashes her wedding and whisks her away on his motorcycle to the rustic Canadian wilderness cabin where they’d once honeymooned. Police detective Mason is fighting for Avery’s love with everything he has. Armed with whipped cream, handcuffs and his undying devotion, Mason vows he will make Avery love again. But it’s only a matter of time before the man she’d planned to kill hunts them down…

More audiobooks are available at: http://www.janspringer.com/audiobooks

Also in ebook and print

Paisley Violette has returned to the secluded Canadian tourist retreat where she was once a famous artist and also involved with two young men in a scorching ménage e trois relationship. Getting back in touch with her inner girl spirit is Paisley’s main focus so she can heal from an abusive relationship. When she unexpectedly runs into her two ex-flames, they re-ignite her naughty ménage cravings. But before she can let herself fall back in love with them, she must relearn how to risk her heart and to trust her body all over again.

Adam Cowie always wondered what happened to the gorgeous free-spirited young woman he and his best friend, Andrew, had been with in a ménage relationship. With Paisley back in his life, he can’t deny their attraction is burning hotter than ever. But this time they need to take it slow so she won’t leave them again.

Andrew Greg hasn’t seen his first love since she took off with another man over ten years ago. Now she’s back in his life, blazing his protective instincts and lashing his desires. This time he’s not going to let the one who got away, get away. This time he’ll make sure she gets a happily forever after.

Blind since nineteen, Summer has blossomed into a famous wood carver…

When she’s almost killed by a serial killer, she’s whisked away to a secluded wilderness cabin by the man she once secretly loved. Summer can’t get enough of touching professional bodyguard Nick Cassidy’s thick, powerful muscles and all those other hard, yummy male body parts that she has always longed to explore.

For years Nick has stayed away from his best friend’s kid sister, nice girl Summer. Now he’s back, and sweeping his gorgeous redhead into the naughty cravings he’s always had for her. With passion blinding him, Nick doesn’t realize their hideout isn’t safe—until it’s too late.